What does the EU do? (engelsk) 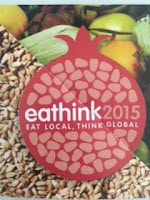 In daily life, we tend to talk about the EU as an organisation far away from us that make decisions that don't really matter for daily life at best, or who's decisions put unfair ties on our politicians and make our lives more complicated. However, the EU is so much more than that, and they fund projects all across Europe that make life better, or at least aim to improve life for a lot people. Take a look at some of the most interesting:

Eat local, think global
An educational tool for schools from European and African countries to critically teach their students about poverty, sustainable farming and food security by including school gardens, photography, web journalism and international exchange. 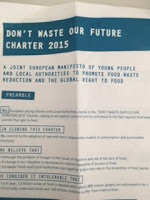 When the civil war was over in the previous Jungo-Slavia, they needed new educational material. The European Union united and sent educational experts to the newly created countries to study the local area, which led to a full curriculum with values like democracy and documents like the Human Rights Declaration in center. Today, this program is being put in local context in more and more countries every day.

Don't waste our future!
Don't waste our future is an Italian project with a two-year timespan, focusing on finding new models to reduce food waste by involving young people all across Europe. The aim to educate 2800 students on how their food waste habits affect the global hunger issue, as the problem isn't enough food-its the distribution and use of food.

The Syrian exodus: fighting for survival 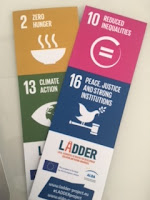 In Spain, they started a project about raising awareness about the humanitarian crisis that has provoked the war in Syria by having it as a topic in school, leading to the creation of an educational photo exhibition.


All of these incorporate the global goals in some way, which I personally find signifiant, because if it feels like the EU is far away, ineffective and irrelevant to everyday life, it's nothing compared to the UN. 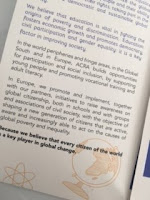 But these projects combine an agenda set by the UN, the global development goals, the European Union to improve communication so these projects can be spread easily across Europe, local authorities so they're accessible actives, and they engage people. Win-win-win-win, and proof that even though these institutions are there to deal with issues seemingly far away from everyday life, like the length of fish and economic independence of African states, they are also there for the sake of you and me-ordinary citizens.

In achieving the goals, emphasis is put on local authorities and thus on local interpretation of the goals. For some, the goals aren't even seen as goals in themselves-they're seen as tools to transform the world to the better. That's also why many of the projects are focused on education and on awareness raising. After all, knowledge is the first step in transformation. 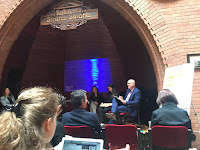 These projects can all fit under larger subheadings, and I've been lucky enough to attend a workshop on one of these: education in the non-formal sector. Here, emphasis is put on projects that pull in people, like easily accessible exhibitions,  and on ensuring that the local community is focused on the goals by educating the civil servants. Thus, the new strategies that the politicians want can be innovative and incorporate the goals better.

Another important aspect of non-formal education is the media. What's not in the news doesn't exist, so making the news, and being relevant on social media is extremely important for being aware and active on the goals. 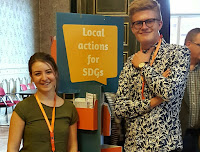 It's also important for people to take ownership of the goals. Honestly, no one wants people to starve or live unjust lives, but it does become harder to feel that it's an area that involves you personally when the UN has taken action on it with this agreement of 17 sustainable development goals. But thinking of them as goals far away that don't matter to you means that all these fantastic projects would never have happened, and in the bigger picture, the 2030 agenda wouldn't be achievable. People take ownership when it involves them.

What does the EU do? (engelsk)